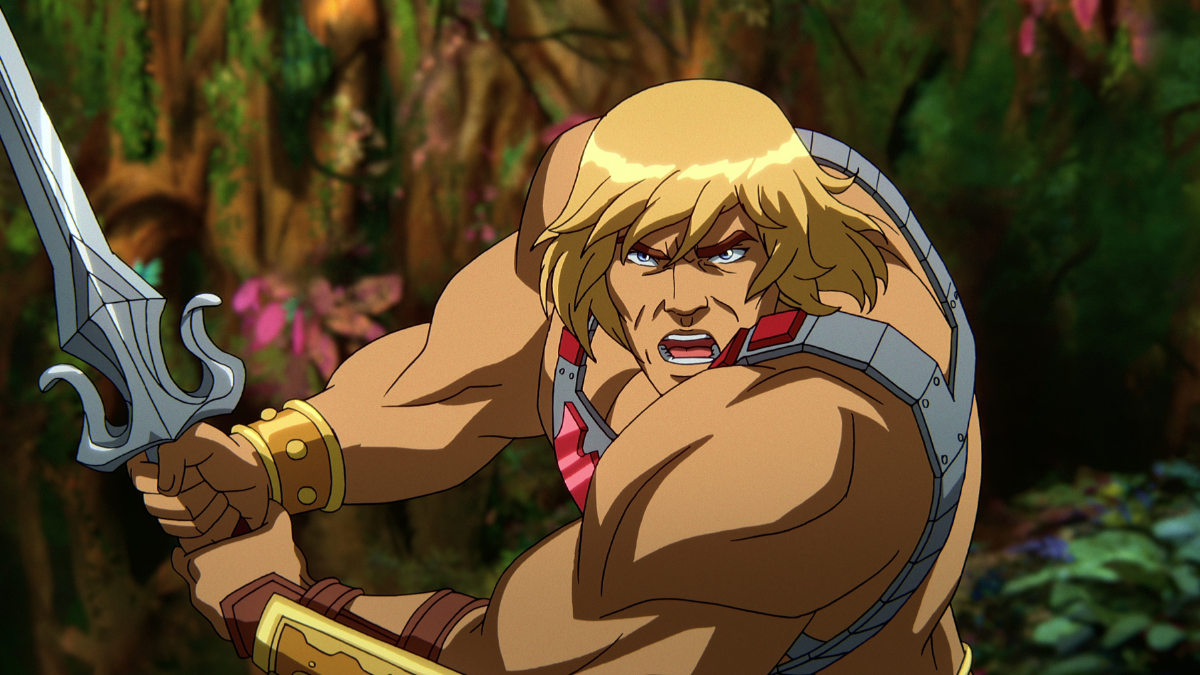 The Masters of the Universe is returning to the small screen and the first trailer for the Netflix series titles Revelation has arrived.

The original show ran from 1983 to 1985 for two seasons. Where the most powerful man in the universe battled against the evil forces of Skeletor. All to protect Eternia and secrets within Castle Greyskull. It also spawned various spin-offs. With shows including She-Ra Princess of Power (also now revamped for Netflix), a 2002 reworking and the horrendous The New Adventures of He-Man in 1990 (He-Man goes to space).

This reboot has dropped the name He-Man from the title. Just like the 1987 movie staring Dolph Lundgren, Frank Langella and Courtney Cox.

Here’s the trailer to enjoy:

The Creator of the show is long-term fanboy Kevin Smith and Clerks Director. So you know that it will have been made with a lot of love for the original series.

For fans of the original show, this has the potential to be a great reboot. The show seems to be following the Transformers: War for Cybertron structure on Netflix where different titles break down each series into a chapter. It looks to update characters like Orco with a more interesting twist than just the comic relief. Whether this is for kids or big kids is still to be seen.

Do you like the Masters of the Universe: Revelation trailer? Are you planning on seeing it when it’s released? What do you think it’ll be like? Let us know in the comments below.

Read IMDB information about Masters of the Universe: Revelation HERE.

Cobra Kai season four is out now on Netflix and the All Valley is back and better than ever. Here’s our review.

SPOILERS: If you’re reading this then you’ve probably seen the show, but if not there are spoilers ahead.

It’s January, and new shows are popping up everywhere. This brings us to the show that I and my friends have been holding our breaths for: the fourth season of the hit Netflix series Cobra Kai! After three seasons, I wondered if there was anything left to mine from the Karate Kid lore or the Johnny/Daniel dynamic. I am happy to report that this might be my favourite season yet! It manages to not only expand upon the universe it has created, but to bring in a new villain, who is so bad that he threatens to outdo even John Kreese!

Season four sets us off where the third left off, with Johnny and Daniel having joined forces to fight Cobra Kai. Their friendship arc is the glue that holds this season together. The story focuses largely on whether they will be able to pull it together and make their partnership work. As in previous seasons, their relationship has its ups and downs. The stakes are heightened, however, as the season leads up to the All-Valley Tournament. A bet between the three senseis – Kreese, Daniel, and Johnny – means that losing the All Valley is losing the title of sensei.

This season explores the ways that both Johnny and Daniel work with the kids. It also examines the kids’ struggles as they prepare for the All Valley while dealing with conflict within the ever-changing network of friends and enemies in the dojos. Robbie has left juvenile hall and decided to join up with Cobra Kai as a means of inflicting revenge on both his dad and Daniel. Tori and Sam continue their rivalry. And John Reese’s old friend Terry Silver (of Karate Kid 3 fame) shows up to kick Cobra Kai into high gear.

Daniel’s son, Anthony, who has largely been absent until now, faces his own dilemma when his friends begin bullying Kenny, the new kid in town. This soft-spoken middle school character brings us into the world of the younger kids, setting up yet another storyline. Kenny becomes the victim of a gang of kids (including Anthony), enduring round after round of bullying before Robbie takes him under his wing. After his induction into Cobra Kai, the formerly shy middle-schooler becomes a bully himself.

This brings me to one of my favourite things about the show. The constant back and forth dynamic between characters makes us feel that anything is possible. There is no black and white in the world of Cobra Kai. Where the Karate Kid told us that Daniel was good, and Johnny was bad, this show gives us a very different point of view. It’s a world where we’re never sure who to root for. In this season, we even see Hawk make a return to the “good guys” side after giving up his spot at Cobra Kai.

With Eagle Fang (Johnny’s new dojo) and Miyagi-Do teaming up, the kids – and the adults – have to learn to work together. Of course, complications ensue. Johnny becomes jealous of what he perceives as Miguel’s preference for Daniel over him. Sam wants to learn both her dad’s karate style and Johnny’s, despite her father’s discouragement. Meanwhile, at Cobra Kai, Kreese is losing his grip on the dojo. His former war buddy, Terry Silver, puts off a rather benign appearance in episode one, growing more and more evil with each episode.

This season is lacking in many of the big fight scenes of the previous seasons, instead choosing to focus their energy on the characters. The All Valley Tournament features several great karate matches and offers a satisfying conclusion to Johnny and Daniel’s arc. In the end, Cobra Kai takes the tournament win, but Johnny and Daniel have reached an understanding.

Tori defeats Sam to take the women’s All Valley trophy but later overhears her sensei paying off one of the referees. It’s clear that Cobra Kai has pulled yet another fast one. But the season ends on an even more ominous – and unexpected – note. Terry Silver assaults the over-aged former Cobra Kai member, Stingray, sending him to the hospital. He then makes a deal with Stingray to blame the crime on Kreese. We end the season with Kreese in handcuffs, Terry Silver set to take over Cobra Kai, and the future of Eagle Fang and Miyagi-Do uncertain. In a last shocking twist, Miguel leaves town in search of his biological father.

Although some may miss the school hallway throw downs, I found this one satisfying in a different way. It just goes to show that the ever-expanding Cobra Kai universe can keep bringing surprises season after season.

Thank you for reading our review of Cobra Kai season four. Do you agree or disagree with our points or have anything to add? If so, leave us a comment below.

Check out our Hawkeye episode one and two review HERE.

This website uses cookies to improve your experience while you navigate through the website. Out of these cookies, the cookies that are categorized as necessary are stored on your browser as they are essential for the working of basic functionalities of the website. We also use third-party cookies that help us analyze and understand how you use this website. These cookies will be stored in your browser only with your consent. You also have the option to opt-out of these cookies. But opting out of some of these cookies may have an effect on your browsing experience.
Necessary Always Enabled
Necessary cookies are absolutely essential for the website to function properly. This category only includes cookies that ensures basic functionalities and security features of the website. These cookies do not store any personal information.
Non-necessary
Any cookies that may not be particularly necessary for the website to function and is used specifically to collect user personal data via analytics, ads, other embedded contents are termed as non-necessary cookies. It is mandatory to procure user consent prior to running these cookies on your website.
SAVE & ACCEPT